With the increase in life expectancy, nowadays we commonly come across with patients with many comorbidities, which make them high risk for general anesthesia. In these patients, regional anesthesia becomes a preferred choice because of its better safety profile and lesser risk of morbidity and mortality. We describe management of a patient with interstitial lung disease for wide local excision of tongue lesion with neck dissection under regional anesthesia.

How to cite this article: Eswaran K, Saini HS, Khadakban DS, et al. Management of a Case of Excision of Tongue Lesion with Neck Dissection under Regional Anesthesia in a Patient with High Risk for General Anesthesia. J Res and Innov Anesth 2022;7(1):19-21.

Tongue surgery is usually done with the help of general anesthesia (GA), either combined with regional block or without it. But for patients for whom risk of GA is high, regional block alone without GA is becoming more accepted. Trend of anesthesia technique is now shifting toward regional anesthesia (RA). The main reason for changing the type of anesthesia from general to regional is the advantages of RA, that is, low morbidity, less adverse effects, shorter hospital stays, avoidance of mechanical ventilation, and negligible mortality.1 We report a case of wide excision of tongue lesion with unilateral neck dissection under sole regional blocks in patient with increased GA risk.

A 57 years old female weighing 70 kg presented to us with small, ill-defined, ulceroproliferative plaque-like mucosal lesions on left lateral aspect of tongue and dyspepsia for last 3 months. She was diagnosed with moderately differentiated invasive squamous cell carcinoma with few subcentimeter sized lymph nodes in left cervical region. She was posted for wide excision of lesion with left neck dissection. Patient in addition had diabetes mellitus type 2, systemic hypertension, and also interstitial lung disease. Her 1-year-old PFT report showed mild restrictive pattern with reduced DLCO. Remaining investigations were within normal limits including blood sugar levels. Airway examination was normal except little short neck. So, considering her chest condition and other comorbidities and discussion with surgeon it was decided to perform the surgery done under regional blocks with IV sedation.

We planned for left glossopharyngeal nerve block and block of superficial cervical plexus on both sides and also intermediate cervical plexus block on left side. Patient counseling was done about plan of anesthesia. Glycopyrrolate 0.2 mg IV was given 0.5 hour prior to taking patient to operating room to reduce salivation. For glossopharyngeal nerve block, a 23-gauge hypodermic needle was inserted about 5 mm deep near the anterior pillar of the tonsil and 2 cc of 2% lidocaine slowly injected on left side after negative aspiration. Loss of resistance technique was used for intermediate cervical plexus block on left side. Patient was placed in supine position with head turned to opposite side. A stimuplex needle (22 guage) was inserted equidistant between clavicular head of sternocleidomastoid and midpoint of mastoid process, behind the posterior border of the sternomastoid muscle. A “pop” was felt as investing fasica was crossed. At this point a volume of 5 milliliters. of LA (0.75% ropivacaine + 2% adrenalized lidocaine in equal volume) was injected after aspiration. To block superficial cervical plexus, the same needle was withdrawn to subcute level and advanced along the posterior border of sternomastoid, first directed toward mastoid process and then toward sternal notch. Five mL of solution was injected here. Superficial cervical plexus block was repeated on other side with 5 mL of LA. We assessed the blocks after 10 minutes. Five mL of LA was infiltrated over left clavicular border. Surgeon infiltrated anterior two-third of tongue with 3 mL of 2% adrenalized lidocaine (Fig. 1). Anesthesia was supplemented with total doses of fentanyl 100 mcg, midazolam 4 mg, dexmedetomidine 50 mcg, and paracetamol 1 gm in intermittent doses, as and when required as surgery lasted for 4.5 hrs. O2 was given with nasal prongs. CO2 laser was used by surgeon to reduce bleeding and keep the field dry (Fig. 2). Utmost care was taken to prevent blood and debris to go down into airway and suction was done promptly. Cart was kept ready for intubation if required at any time. Patient remained comfortable during entire surgery and was arousable during intra-operative period. Postoperatively pain relief lasted for more than 24 hours requiring IV paracetamol 1 gmm in first 24 hours only and no ICCU stay with patient discharged on 4th day. 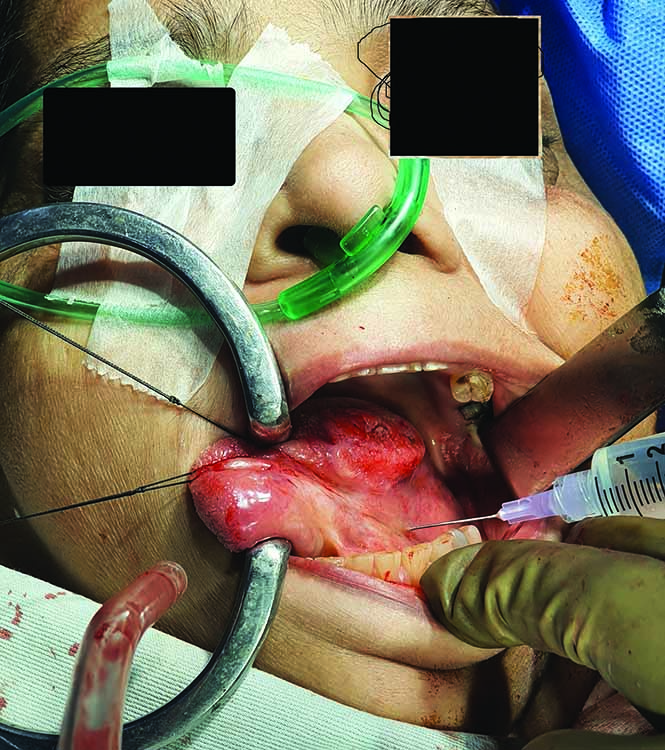 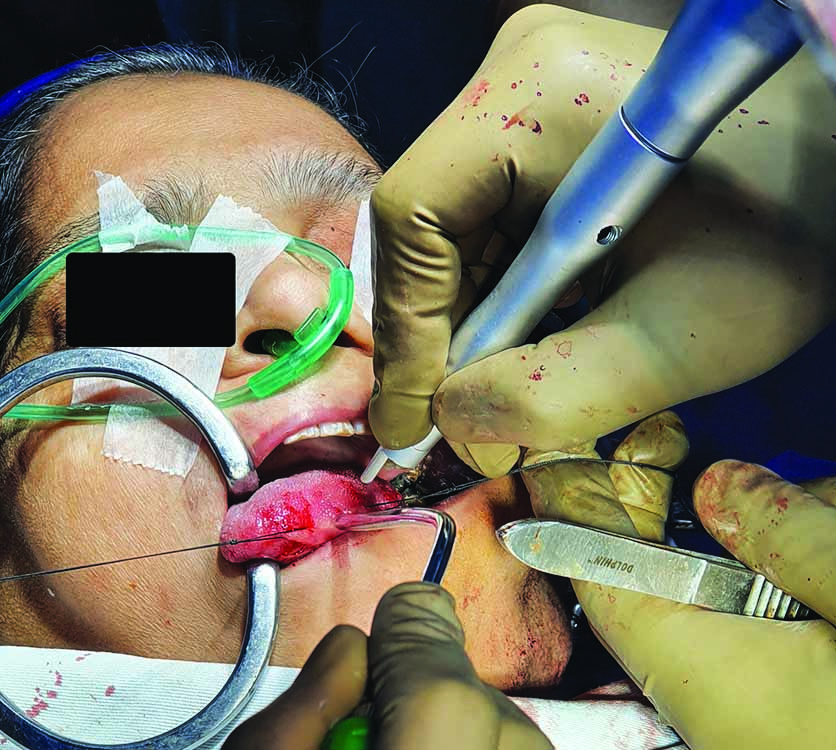 GA, lasting more than two and half hours predicts post-operative pulmonary complications strongly.2 Long exposure to GA depresses macrophage function, slows the mucociliary clearance, interferes with surfactant production, and increases the permeability of alvelolar-capillary barrier. It also activates alveolar nitric oxide synthase, and increases sensitivity of pulmonary vasculature to neurohormonal mediators. This depresses immune defenses and also reduces gas exchange capacity. Instrumentation of upper airway and irritants like disinfectants and desflurane may cause bronchoconstriction, mediated by vagus. This leads to collapse of peripheral airways during exhalation, leading to incomplete emptying of alveoli.3

Regional blocks are frequently used in cervical region whether as a single procedure or associated with sedation or GA.4 Sensory innervation of tonsils, anterior surface of epiglottis, vallecula, posterior third of tongue, and wall of pharynx, is by glossopharyngeal nerve and can be blocked in two ways: extraoral (prestyloid) approach and intra-oral approach.5 Intraoral abolishes gag reflex during surgical procedures in oral cavity. Benumof suggests the anterior tonsillar pillar method which is relatively new. Tongue is pushed to opposite side. Then 2 mL lidocaine is injected just lateral to the base of anterior pillar, 5 mm deep using a 23 G needle. Procedure is repeated on other side.6

Block of cervical plexus provides adequate pain relief and anesthesia in neck and head surgical procedures and has been so used.7 For surgical procedures in anterolateral and anterior sides of neck, block of superficial cervical plexus is enough to produce surgical anesthesia.8 Infiltration of local anesthetic solution in subcutaneous plane, along the posterior border of sternomastoid muscle at its midpoint. It can be done either by the anesthesiologist or by the surgeon. The intermediate block is given by inserting the needle through the subcutaneous layer, piercing the investing layer of the deep cervical fascia but staying outside the deep cervical fascia (i.e., paravertebral fascia). Complications like infections or hematoma can result from this procedure. Block of phrenic nerve, which often occurs with deep cervical plexus block, does not occur superficial cervical plexus block. The worst side effect of this block can be CNS toxicity. It is more often caused by direct intravascular injection inadvertently, than by absorption of local anesthetic drug, which is seen with deep cervical plexus block.9

Benefits of use of regional or local anesthesia in perioperative period in malignancy surgeries are manifold. Suppression of inflammatory response and suppression of metabolic and neurohormonal stress, reduction in need of opiates and inhalational anesthetic agents and decrease in the pain related to surgery and malignancy are indirect benefits. Direct effects are cancer cell cytotoxicity, antimetastatic/antiproliferative properties, reducing cancer cell viability and proliferation, and antiproliferative and demethylating characteristics.10

Local anesthesia procedures, like superficial cervical plexus block, have relatively less risk of complications.11 Scavonetto and others argue that combining RA with GA decreases both mortality rates and progression of disease in cancer patients.10,12