Aims and objectives: Dexmedetomidine a potent and highly selective α-2 adrenoceptor agonist with sympatholytic, sedative, amnestic and analgesic properties is ideal for monitored anesthesia care (MAC). When used with Ketamine, the bradycardia and hypotension associated with dexmedetomidine may be prevented. Whereas dexmedetomidine may prevent tachycardia, hypertension, salivation, and emergence phenomena of ketamine. There are few references in literature about this drug combination. Hence we studied and compared the effect of intravenous dexmedetomidine infusion with low-dose ketamine infusion on sedation and hemodynamics in ear surgeries under MAC.

Materials and methods: ASA 1 and 2 patients scheduled for elective ear surgeries were randomized in groups A and B. Patients in both groups were administered IV dexmedetomidine 0.5 μg/kg as a bolus over 10 minutes followed by the 0.5 μg/kg/hr as maintenance infusion in group A, whereas low-dose IV Ketamine 0.2 mg/kg/hr was added in group B in addition to dexmedetomidine infusion.

Local block using 2% lignocaine with adrenaline was performed by the ENT surgeon. Sedation (MOAA/S) hemodynamics, respiratory rate and oxygen saturation were recorded. Patient satisfaction was assessed using Likert scale. Mann-Whitney test was used to compare sedation between the two groups. Hemodynamic variables were analyzed by Student’s t -test. The Association of parameters among study group was assessed with the help of Chi-square test. Qualitative data was presented with the help of Frequency and Percentage table.

Results: There was a statistically significant difference (p < 0.05) in sedation score between the groups (group A-3, group B-2) from 5 minutes interval onwards. There was significant difference in hemodynamics between the two groups from 5 minutes interval onwards with the values being higher in group B. Patient satisfaction score was better in group B compared to group A. Group A, i.e., only exmedetomidine needed more interventions to maintain sedation and to correct hypotension.

Dexmedetomidine is a potent and highly selective α-2 adrenoceptor agonist with sympatholytic, sedative, amnestic and analgesic properties. It provides unique “conscious sedation” and analgesia, without respiratory depression.1 This has facilitated its use for surgeries of the ear such as tympanoplasty, stapedectomy, ossiculoplasty, mastoid surgery, etc., under MAC. Ketamine, an N-methyl-D-aspartate (NMDA) receptor antagonist has sedative, analgesic and sympathomimetic effects.2 When used together, dexmedetomidine may prevent tachycardia, hypertension, salivation, and emergence phenomena of ketamine, whereas ketamine may prevent bradycardia and hypotension associated with dexmedetomidine.3 Combination of ketamine with dexmedetomidine has been used for sedation particularly in pediatric patients as well as for procedural sedation in adults.4-11 Hence we conducted this prospective, randomized, double blind, comparative study to elucidate the effects of dexmedetomidine with or without low-dose on sedation and hemodynamics in ear surgeries done under MAC. Our primary aim was to compare intraoperative sedation and study the effect on hemodynamics.

Consecutive patients who participated in the study were randomized based on computer generated random numbers (www.randomizer.org) into two groups, A and B. The patients were blinded to group allocation.

Drug loading and administration were done by two different anesthetists to ensure blinding. Dexmedetomidine was prepared 5 μg/mL strength in syringe 1 (20 mL) and ketamine as 5 mg/mL in syringe 2 (20 mL).To ensure blinding in group A, a syringe with 20 mL normal saline was labeled as Syringe 2.

The level of sedation Modified Observer Assessment of Alertness/Sedation Scale (MOAA/S), HR, BP- MAP, SBP, DBP, were assessed at the start and end of bolus infusion, and every 5 minutes thereafter for 15 minutes and every 15 minutes till the completion of surgery.

Hypotension was defined as more than 25% fall in MAP compared to MAP recorded at end of dexmedetomidine bolus or MAP less than 60 mm Hg, whichever was lower. Hypotension was treated with inj. Ephedrine 6 mg (E6).

Injection Fentanyl 20 ug IV bolus was administered as a rescue analgesic. In spite of sedation and hemodynamic stability if there was impairment in the visibility of the surgical field due to bleeding injection nitroglycerin 0.05 μg/kg/min was started.

In the postoperative period, after 24 hours the patient was asked about the recall of perioperative events and patient satisfaction with sedation during surgery was assessed using Likert scale.12

The demographic details such as age, weight, gender and ASA status were comparable in both the groups. There was a statistically significant difference (p < 0.05) in sedation levels between both the groups from 5 minutes interval onwards. In group A sedation score remained 3 for most of the surgery duration whereas in group B it was 2 (Fig. 1). 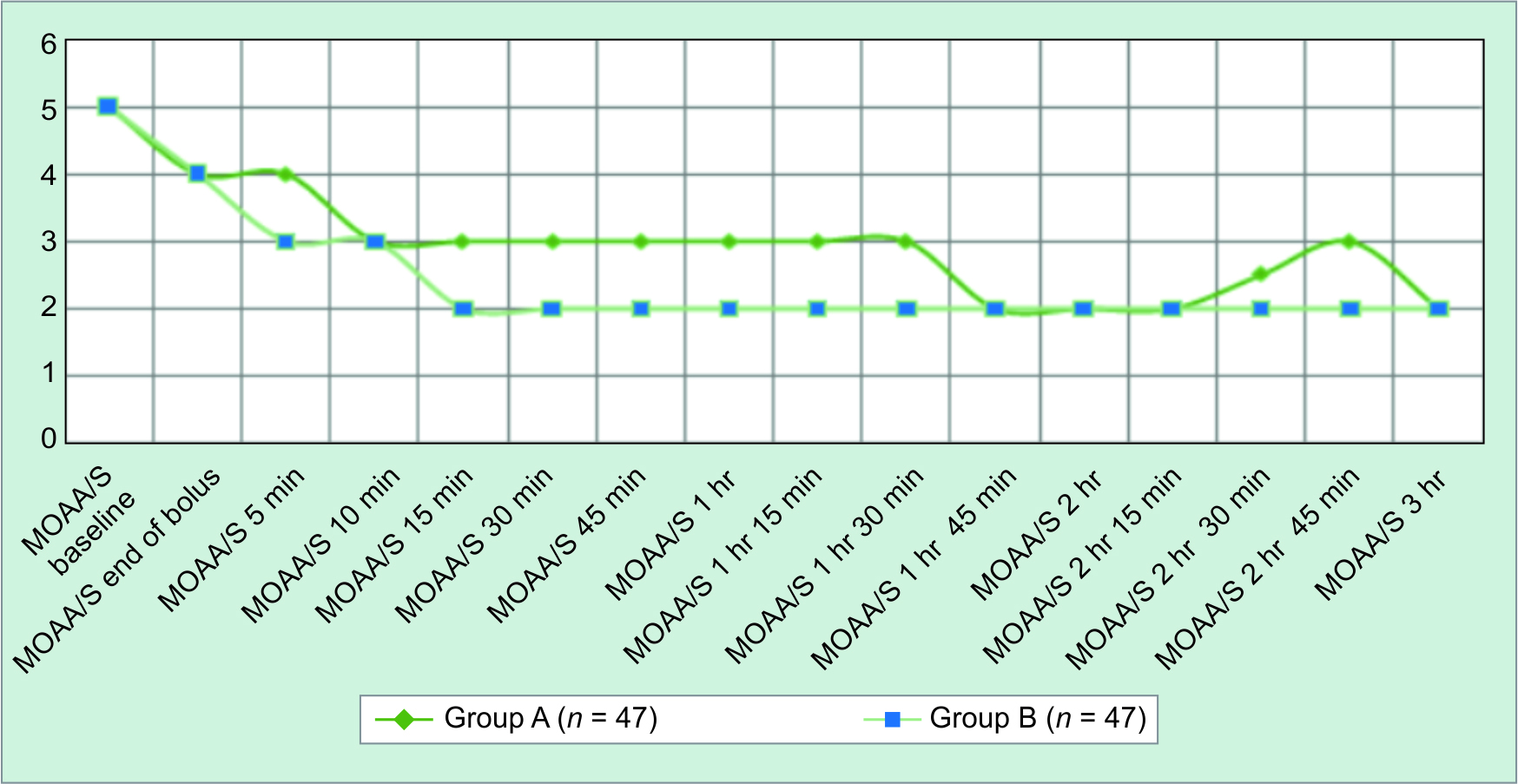 Fig. 1: Comparison of sedation score between the groups 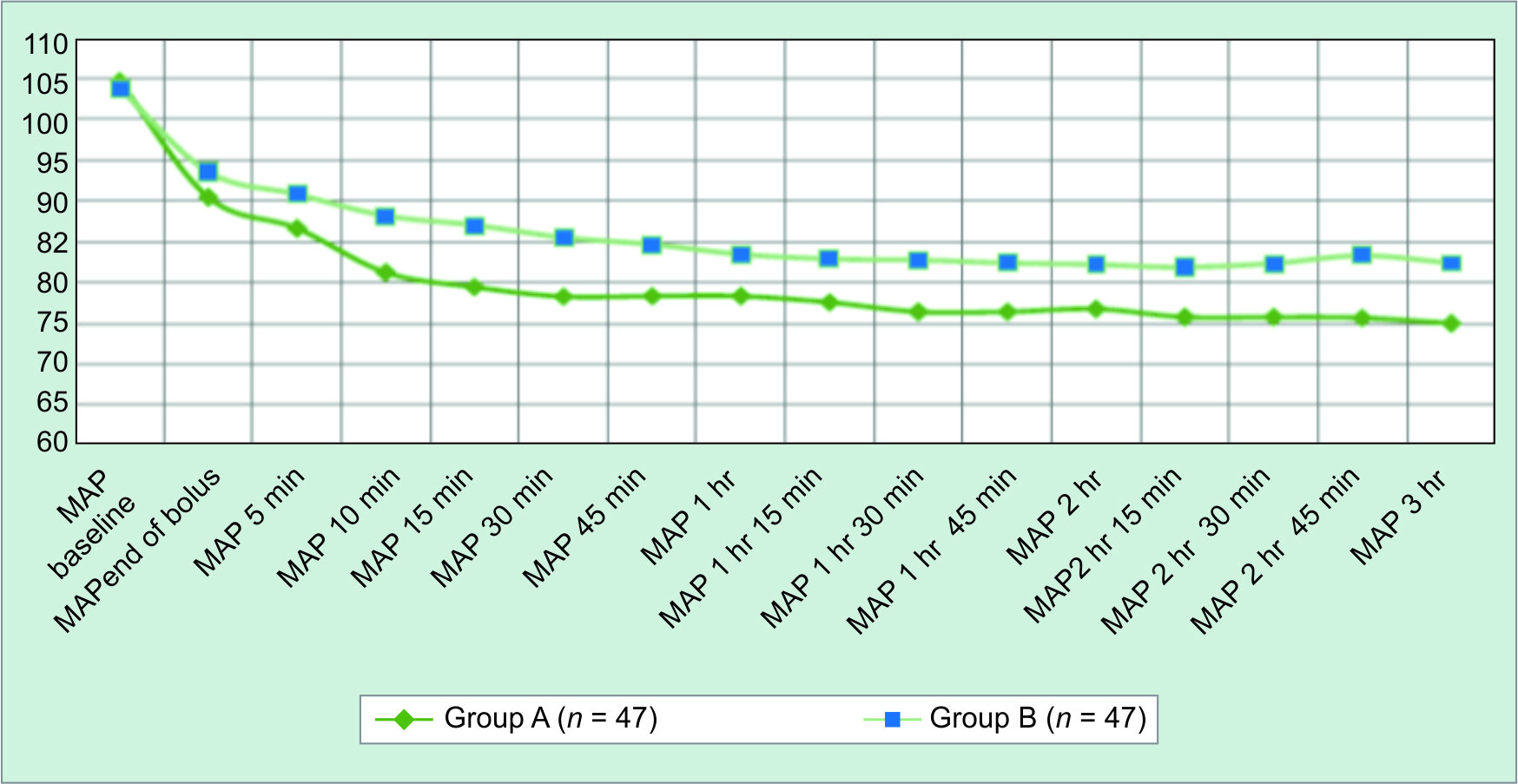 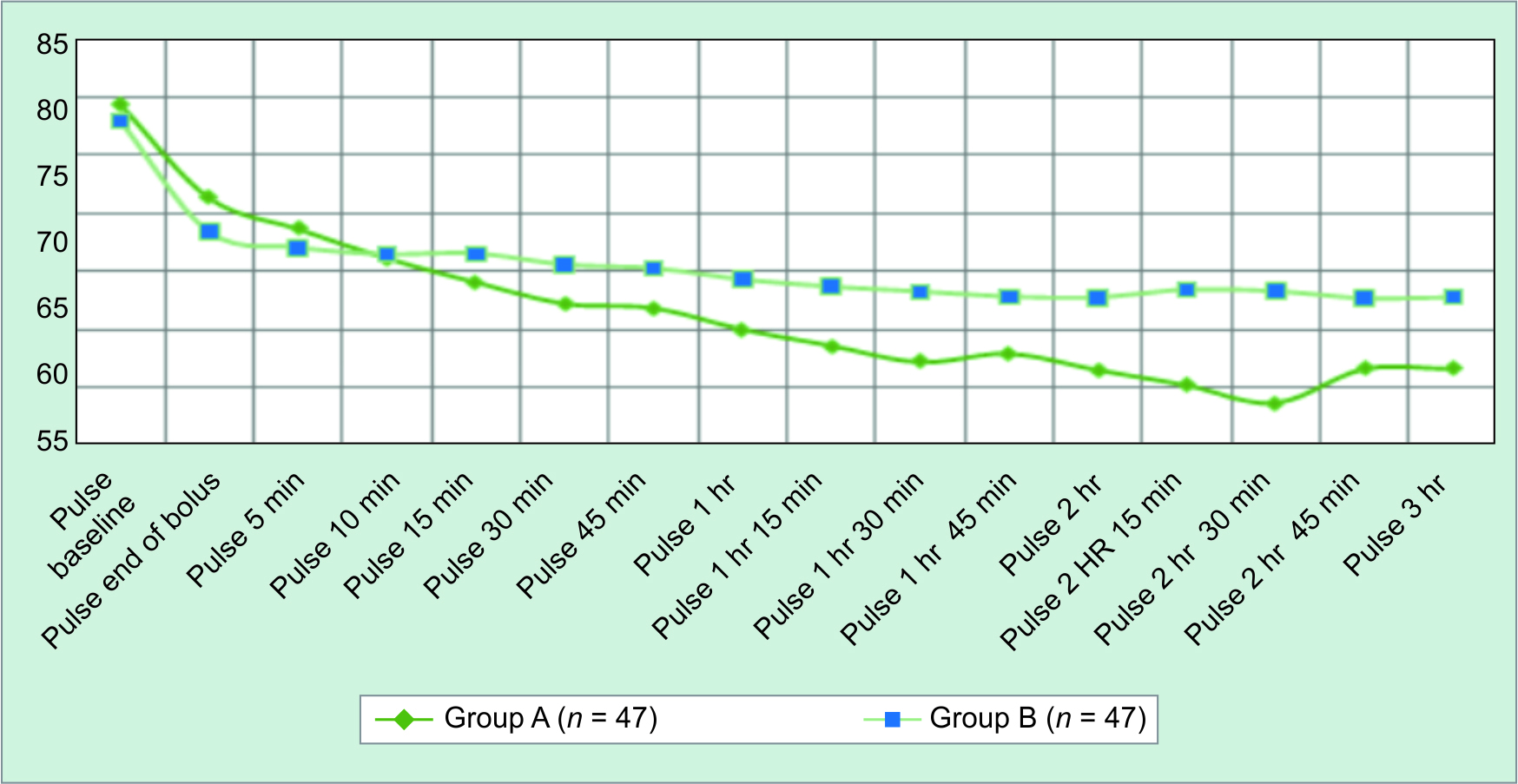 Considering interventions, in group A, 4 patients required dexmedetomidine infusion to be increased to 0.75 μg/kg/hr to achieve adequate sedation, whereas none of the patients in group B needed change in Infusion rate (8.5%). Inj. Ephedrine as a single IV bolus 6 mg for hypotension was required by 6 patients (12.8%) of group A as compared to 1 patient (2.1%) in group B.

This study aimed to compare sedation and hemodynamic profile of dexmedetomidine infusion alone and in combination with low-dose ketamine infusion in ear surgeries. A statistically significant difference was seen in sedation, MAP and HR between the two groups. Low-dose ketamine infusion (0.2 mg/kg/hr) in group B ensured early onset sedation and stable hemodynamics with higher intraoperative MAP as compared to group A. Despite the higher MAP in group B, the surgical field was unaffected.

In our study, adequate sedation score (MOAA/S 2-3) was achieved in both groups, with none of the patients having inadequate or excess sedation. Patients in group B achieved a sedation score of 3 at 5 minutes (after infusion) and score 2 at 15 minutes which was earlier than group A. Sinha S.K et al. found sedation scores in dexmedetomidine-ketamine group was 3.43 whereas in dexmedetomidine group 3.97 for awake fibreoptic intubation. These findings are similar to our study, but Sinha SK et al. noted observations only for 2 minutes postintubation.11 Chun E.H. et al. in their study for chemoport insertion under MAC found lowest MOAA/S score 2 in dexmedetomidine-ketamine (group DK). But they needed more rescue sedative, which could be due to the single bolus of ketamine used rather than infusion.6 Bali B K et al. used Ramsay sedation Score (RSS) to evaluate sedation in upper gastrointestinal scopy and noted mean time to achieve the score of 3-4 was 3.7 ± 0.4 minute.5 The time needed to achieve MOAA/S 3 in our study was 5 minutes from the end of bolus. The sedation score used in our study was MOAA/S whereas Bali et al. used the RSS score.

Although hemodynamics stayed within normal physiological limits there was a statistically significant fall in MAP from baseline in both groups in our study. In group B, low-dose ketamine infusion (0.2 mg/kg/hr) was attributed to higher intraoperative MAP. Despite the higher MAP, the surgical field was unaffected. Similar to our results Sinha S.K. et al. compared the fall in MAP between the two groups and found a significant difference. In their dexmedetomidine Ketamine group (group I) the fall in MAP from baseline was significant only at 2 minutes interval whereas in the dexmedetomidine group (group II) there was a significant fall in MAP from baseline at all intervals.11 However Sinha et al. found no significant fall in MAP compared to baseline in dexmedetomidine-Ketamine group which could be due to the fact that they used a higher bolus followed by infusion of ketamine and also recorded their finding only for 2 minutes postintubation.11 In contrast, Bali BK et al. found insignificant change in hemodynamics compared to baseline in their groups. This could be due to the use of ketamine as a single bolus along with a smaller duration of the procedure, i.e., 20 minutes.9

In our study to achieve adequate sedation (MOAA/S 2-3), in group A dexmedetomidine infusion needed titration from 0.5 μg/kg/hr to 0.75 μg/kg/hr in 4 patients (8.5%), whereas in group B none of the patients (0%) required titration (p -0.04). Thus significantly more patients required adjustment of dexmedetomidine infusion to 0.75 μg/kg/hr in group A. This also confirms better sedation characteristics in group B as compared to group A. Bali BK et al.5 as well as Rasheed MA et al., needed rescue boluses of ketamine for sedation which may be due to the use of initial bolus of ketamine rather than infusion as used in our study.5,13

9. Dexmedetomidine with low-dose ketamine for cataract surgery under peribulbar block in a patient with Huntington“s chorea [Internet]. [cited 2017]. Available from: https://www.ncbi.nlm.nih.gov/pmc/articles/PMC4383114/