Background: Subarachnoid block (SAB) is a gold standard anesthetic technique for lower abdominal surgeries. Hypotension is a very common observation following a SAB. Perfusion index (PI) is a new parameter that can be used as a noninvasive method to find out the chances of developing hypotension after SAB.

Aim and objective: The aim and objective of this study was find out the relation between baseline PI and the likelihood of developing hypotension after SAB in lower abdominal surgeries.

Results: The hypotension in group I was 12.28% whereas in group II was 74.58%. The receiver operating characteristic (ROC) curve showed that baseline PI could be a useful parameter for detecting patients at risk of developing hypotension. The area under the ROC curve for the prediction of hypotension was 0.912. The specificity and sensitivity of PI (baseline) of 3.3 to find hypotension were 75.38 and 94.12%, respectively.

The prospective double-blinded observational study was performed on 120 patients fit for various elective lower abdominal surgeries under spinal anesthesia at Jawahar Lal Nehru Medical College and associated group of Hospitals, Ajmer approved from institution ethical committee with well-informed consent. The patients of ASA physical status class 1 and 2 in the age group of 20–60 years, of either sex who were planned for lower abdominal surgeries under SAB, were selected for our study. The study population was allocated into 2 groups with 60 patients in each group.

Group I (n = 60): With a baseline PI of ≤3.5. Group II (n = 60): With a baseline PI of >3.5. All patients included in the study were kept NBM for 8 hours. The procedure was explained to patients and their close relatives and informed written consent was taken. Intravenous (IV) access with optimum size i.v. cannula was secured in the forehand. Every patient was preloaded with 500 mL of Ringer lactate (RL) over 30 minutes.

Basic ASA monitoring with ECG, NIBP, and pulse oximetry (SpO2) was applied. In our study, Schiller TRUSCOPE ultra-Q7 multipara monitor with specific pulse oximeter probe (Masimo SET rainbow®; Masimo Corp., Irvine, CA, USA) was used in all patients with ECG, NIBP in the right arm, PI was seen in the supine position in the right index finger. Baseline parameters were recorded after preloading. Under all aseptic precautions SAB was given by an anesthetist resident doctor unaware of the baseline PI values, SAB was given using Quincke’s 25-G spinal needle in a sitting position with 15 mg (3 mL) of hyperbaric 0.5% bupivacaine at the L3–L4 or L4–L5 intervertebral space. Patients were made to lie in a supine position immediately after spinal anesthesia was given. Ringer lactate infusion was started and continued till the completion of surgery. Immediately after this, we started recording all parameters including PI at every 2 minutes for the first 20 minutes then every 5 minutes for 60 minutes by the same anesthetist who administered SAB.

Hypotension was defined as MAP %3C;65 mm Hg and treated with an IV bolus of 6 mg drug mephentermine. The first 60 minutes after SAB was considered as anesthesia-induced hypotension. Bradycardia with heart rate <55 beats/minute was treated by giving injection atropine 0.6 mg IV bolus. The level of sensory blockade was checked 2 minutes after the spinal injection with the pin prick method. Patients who did not achieve T6 level sensory block were excluded from the study. The maximum cephalad height of the block was checked after 20 minutes of SAB. Motor block was checked by Modified Bromage scale.

Statistical analysis was carried out using Microsoft Excel and MedCalc software. Categorical data like age, sex weight, and height distribution were compared using the Shapiro–Wilk test, and categorical variables like frequency, the percentage was compared by Pearson’s Chi-square test. Quantitative parametric data (numerical data) were analyzed using the Student’s unpaired t-test. Receiver operating characteristics (ROC) curve was plotted between baseline PI and occurrence of hypotension among study subjects. A p value of <0.05 was considered statistically significant and <0.001 as highly significant.

Gender distribution in both the group was comparable (Table 2).

Duration of surgery in both the group was comparable (Table 3).

Comparison in intraoperative heart rate in both the group was comparable (Figs 1 to 4).

Figure 5 shows that baseline systolic BP was comparable in both groups, but there was a significant decrease in systolic blood pressure in group II from 4 to 60 minutes.

Figure 6 shows that baseline diastolic BP was comparable in both groups, after SAB, there was a significant decrease in systolic blood pressure in group II from 2 to 60 minutes.

Area Under the ROC Curve (AUC)

Hypotension following SAB for lower abdominal surgery is very common. Non-invasive blood pressure (NIBP) measurement is the basic method of monitoring intraoperative hemodynamics. Nevertheless, the lack of real-time beat-to-beat hemodynamics measurement by NIBP limits its effectiveness so that additional precautions may be required. Perfusion index is the ratio of pulsatile blood flow to non-pulsatile blood flow in the peripheral vascular tissue.10,11 Perfusion index is reciprocally related to the vessel tone. A lower PI denotes a higher peripheral vascular tone. 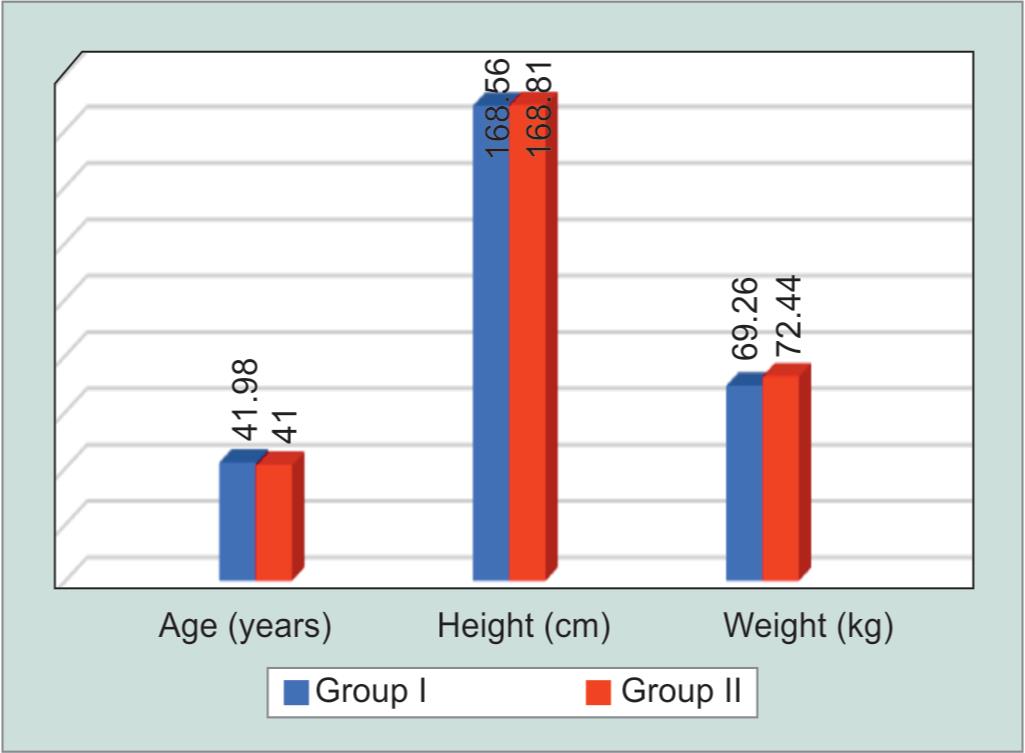 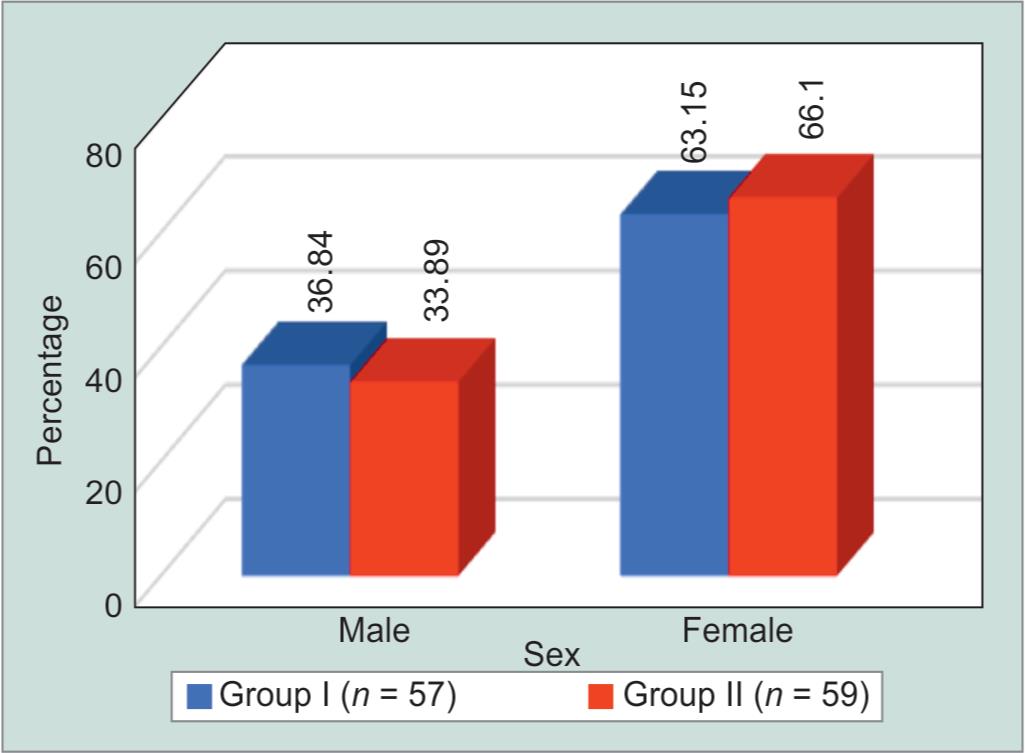 Fig. 2: Comparison of gender distribution between group I and group II 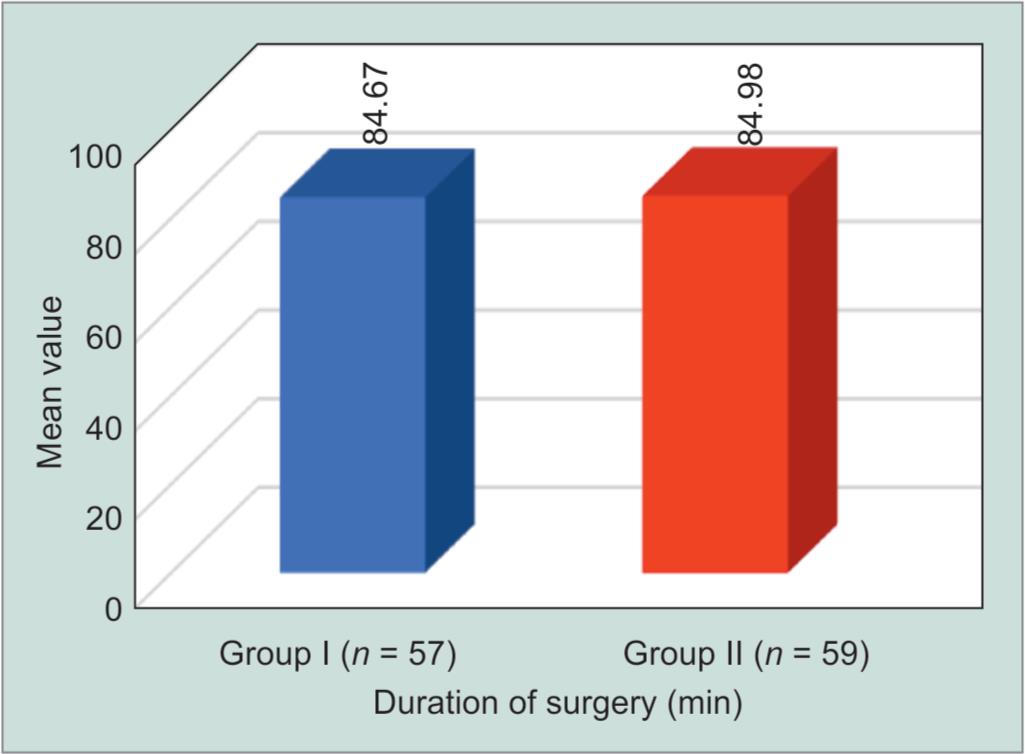 Fig. 3: Comparison of duration of surgery between group I and group I. Comparison in intraoperative heart rate in both the group was comparable 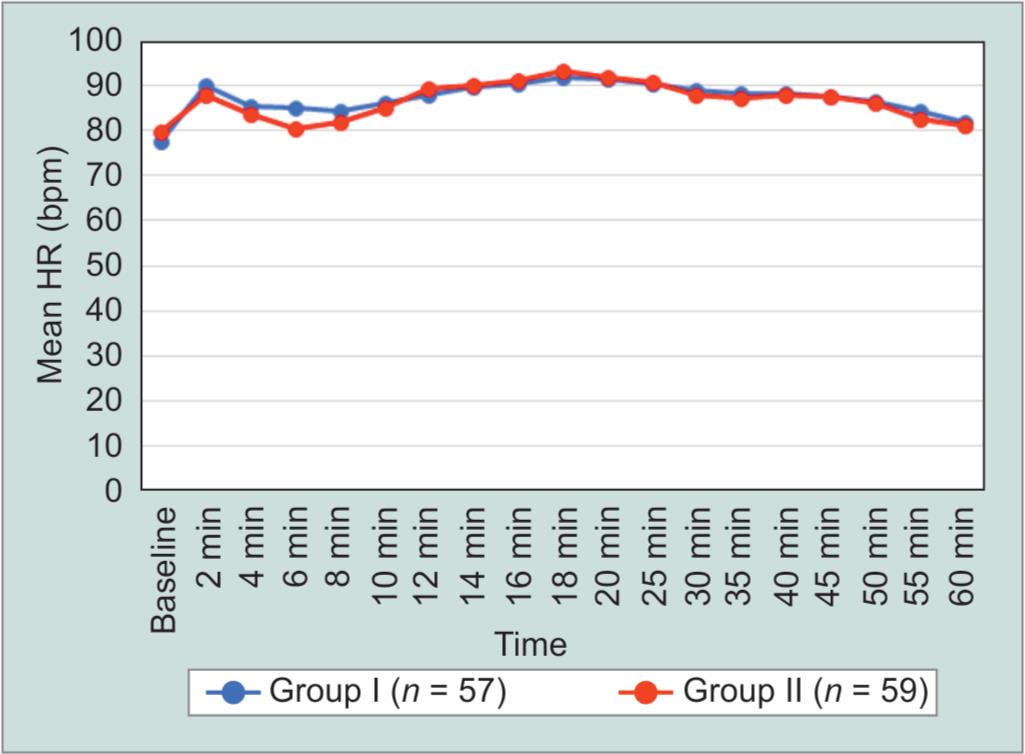 Fig. 4: Comparison of intraoperative heart rate between group I and group II 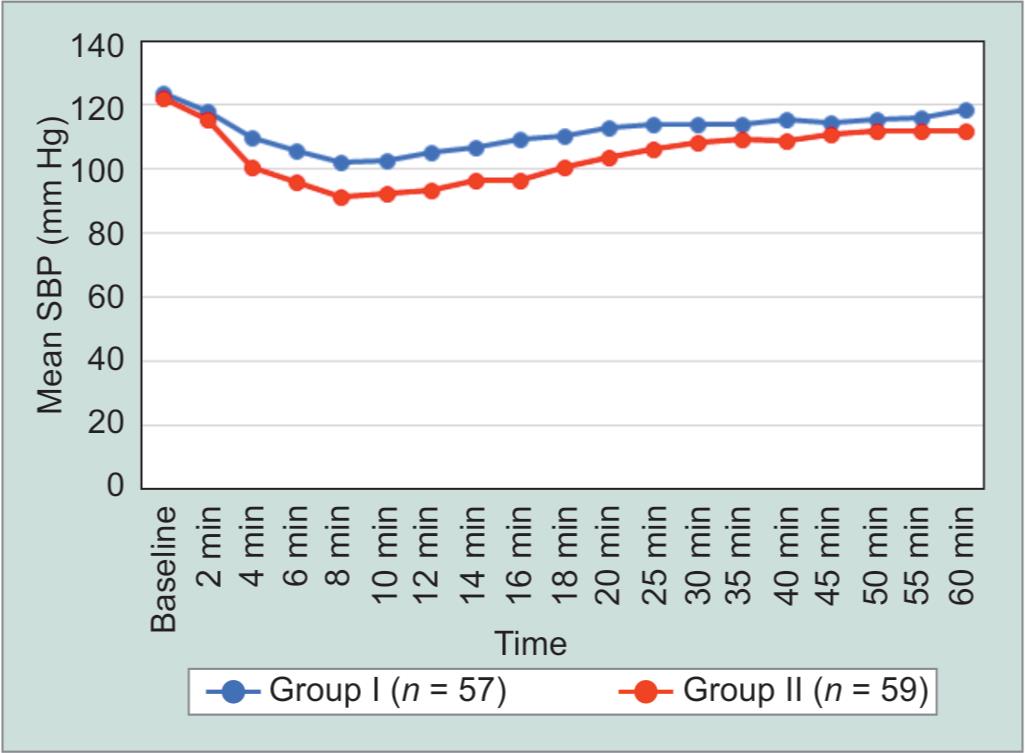 Fig. 5: Comparison of intraoperative systolic blood pressure between group I and group II 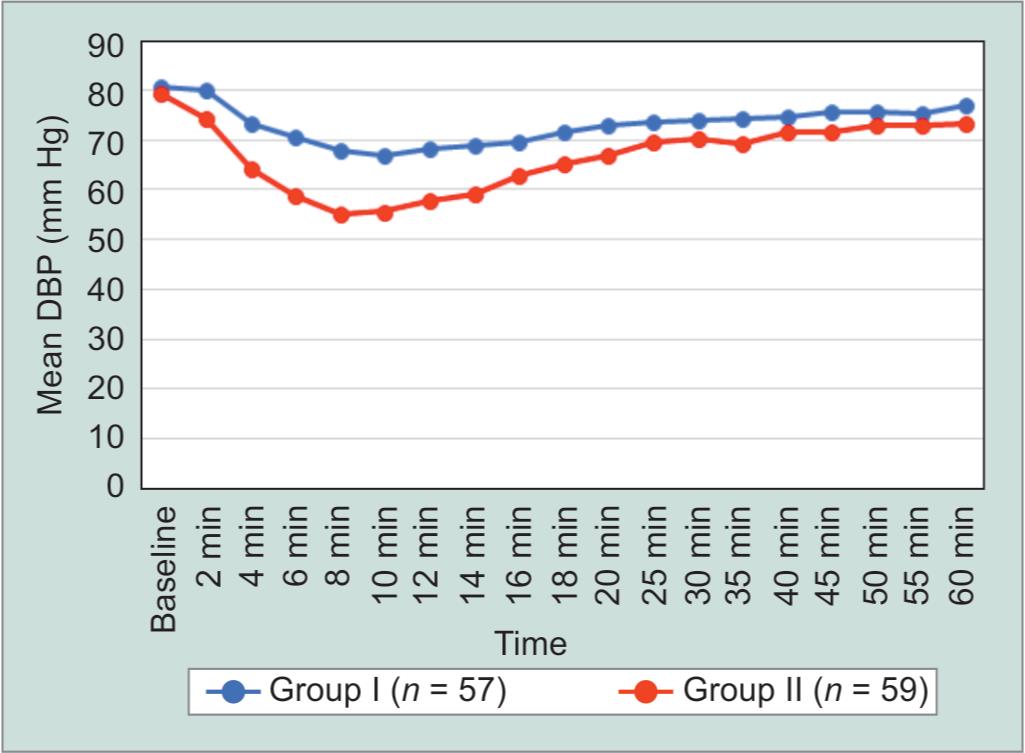 Fig. 6: Comparison of intraoperative diastolic blood pressure between group I and group II

In this study, the baseline PI >3.5 and the likelihood of hypotension were correlating significantly which is similar to the findings of studies done by Toyama et al. and Ankita Gupta et al.9,12

There were some limitations in this study. Movement of the patient and any stimulus leading to sympathetic stimulation like anxiety could alter the PI values.

During the study, PI values were recorded with extreme care to minimize the patient movement, particularly while recording baseline parameters and all participating patients were explained about the procedure before taking them up for surgery to alleviate anxiety. Since PI depends upon the vascular tone of peripheral vessels, its role is questionable in predicting hypotension in situations where the vascular tone is affected and thus more research is required before adopting it as a universal parameter to predict hypotension after SAB.13 In addition, further research comparing PI with invasive and accepted tools for hemodynamic monitoring will enlighten its utility more. 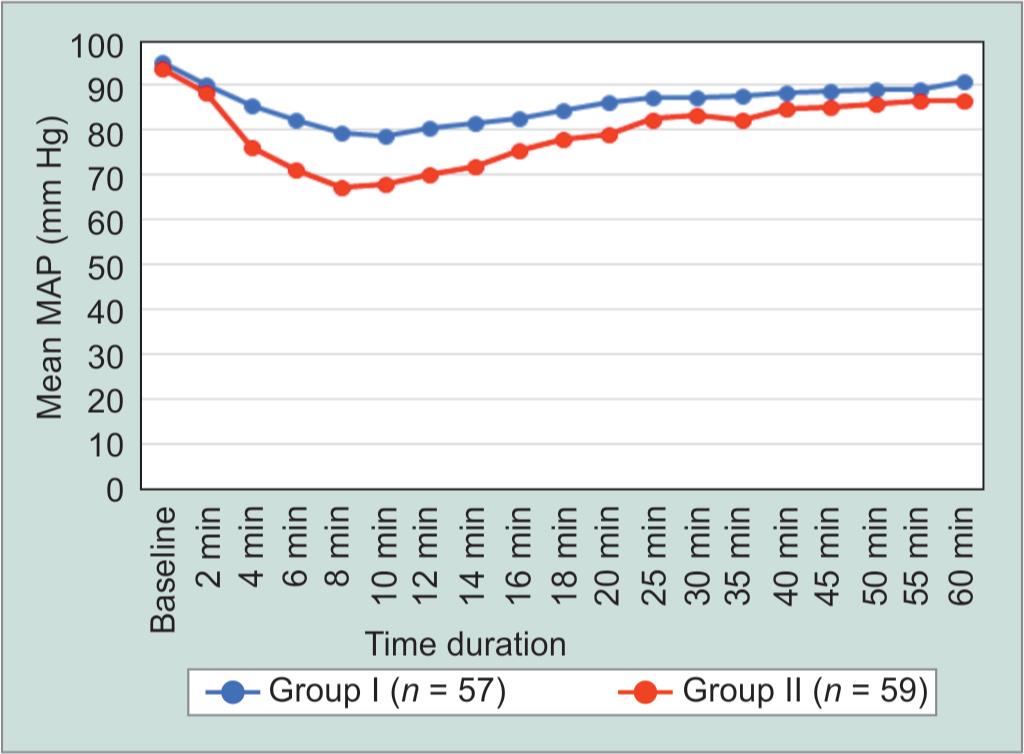 Fig. 7: Comparison of intraoperative mean arterial pressure between group I and group II 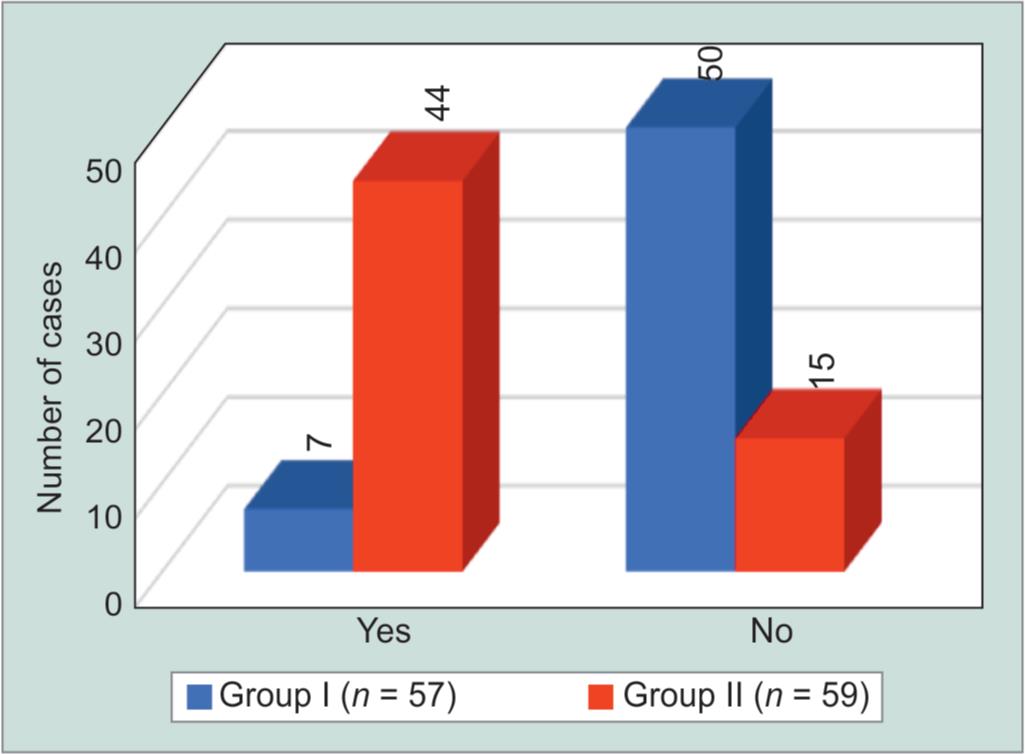 Fig. 8: Comparison of incidence of hypotension between group I and group II 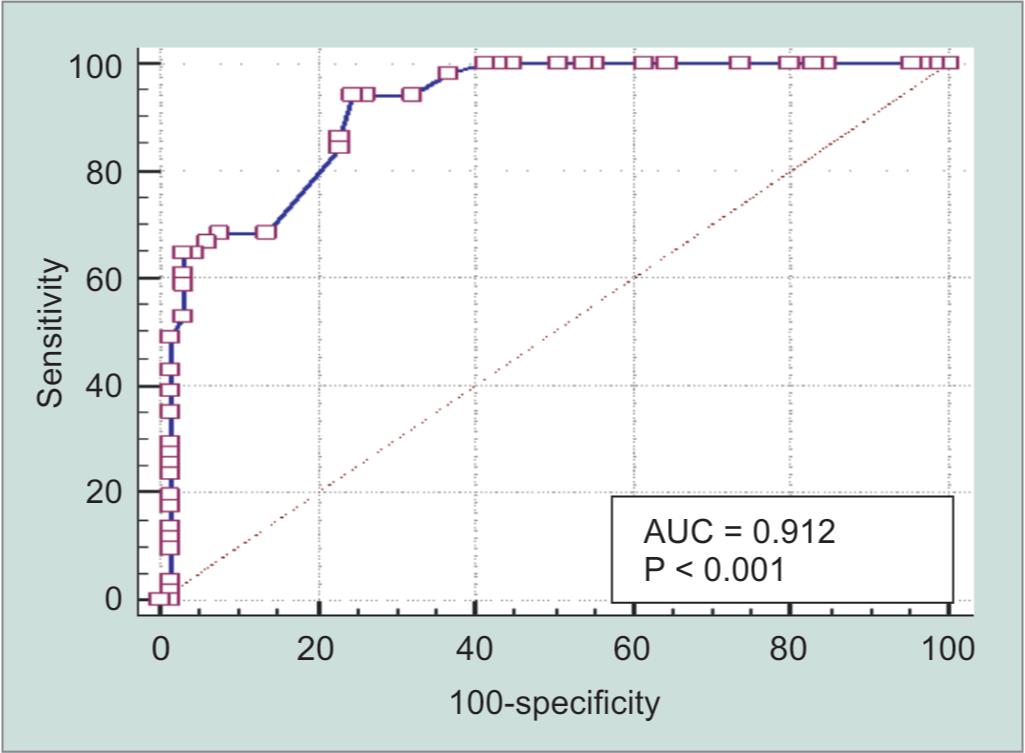 Fig. 9: ROC curve between baseline PI and incidence of hypotension

11. Varghese RV.Perfusion Index Assessed from a Pulse Oximeter as a Predictor of Hypotension during Spinal Anesthesia for Caesarean Section.

12. Gupta A, Dubey A, Pandey A, et al. Perfusion index derived from pulse oximeter as a predictor of hypotension following sub arachnoid block for below umbilical surgery. IJSR 2019;8(10):61–63.