Mediastinal hematomas following internal jugular vein (IJV) cannulation is relatively a rare complication with a very few cases reported in the literature. We hereby report a case of posterior mediastinal hematoma in a 21-year-old primigravida who underwent exploratory laparotomy postcesarean section. In this patient, anatomical landmark guided central venous catheter insertion through the right IJV was attempted using modified Seldinger’s procedure in intensive care unit (ICU) after the surgery. A total of three attempts were made. The procedure was abandoned since there was resistance felt during guidewire insertion. A routine postprocedural chest radiograph and subsequent high-resolution computed tomography (HRCT) showed a large posterior mediastinal hematoma that developed as a result of injury to the IJV and carotid artery during the procedure. The patient was hemodynamically stable throughout and hence managed conservatively. The hematoma resolved completely over a duration of 6 weeks. This case is being reported for its relative rarity and to signify the importance of obtaining a routine postprocedure chest radiograph and to state that even mediastinal hematoma can be managed conservatively in asymptomatic patients.

The placement of central venous catheters is done routinely in patients admitted for surgical procedures, in the ICUs and dialysis units both for therapeutic and diagnostic purposes. This invasive procedure is associated with several documented complications either during insertion of the catheter (e.g., arterial puncture, pneumothorax, arrhythmias); and/or during maintenance of the line (e.g., infection, thrombosis or other mechanical risks). The use of postprocedure chest radiograph to confirm the correct position of the catheter and to detect other complications, such as pneumothorax or hematoma is a regular practice.1

We report a case of posterior mediastinal hematoma following insertion of a central venous catheter in a patient who underwent exploratory laparotomy postcesarean section and the outcome of conservative management.

A 21-year-old primigravida patient, a known case of severe pregnancy-induced hypertension on treatment with labetalol and nifedipine had undergone emergency lower segment cesarean section under subarachnoid block. The surgery was uneventful. On postoperative day 1, she developed giddiness and there was an increase in abdominal girth and a drop in the hemoglobin from 10.4 to 5.9 g/dL. Coagulation profile including bleeding time, clotting time, international normalized ratio (INR), prothrombin time, partial thromboplastin time and platelet count of the patient was normal. An emergency exploratory laparotomy with drainage of rectus muscle hematoma and hemoperitoneum under general anesthesia was done for the same. The patient was transfused 2 units of whole blood and 4 units of fresh frozen plasma (FFP) intraoperatively. The surgical procedure was uneventful and she was hemodynamically stable. The patient was not extubated and shifted to ICU on the ventilator for further management.

Placement of a triple lumen central venous catheter through the right IJV was planned by anatomical landmark technique to monitor postoperative central venous pressure and to guide the fluid therapy. Well informed written consent of patient’s relative was taken for the same.

Insertion of a 7 French triple lumen central venous catheter was attempted through the right IJV by anatomical landmark technique using 22 G finder needle and then using 16 G needle. Venous blood was aspirated. There was resistance felt during guidewire insertion. Hence entire assembly was removed. During the second attempt, the artery was punctured hence 16 G needle was removed and the pressure was applied for 5 minutes. One more attempt was made on the right side but was abandoned due to failure to advance the guidewire.

An attempt to place the catheter through left IJV was made but due to the inability to insert guidewire, it was abandoned too. Finally, the catheter was placed through the right-sided femoral vein.

The patient was stable after the procedure with a heart rate of 84 beats per minute, blood pressure of 138/84 mm Hg, central venous pressure of 7 cm of water, maintaining oxygen saturation of 100% on the ventilator. The next day, the patient was conscious, hemodynamically stable, with improved hemoglobin of 7.7 g/dL and hence extubated.

As per our institutional protocol, the patient underwent a routine chest radiograph in the postoperative period. To our surprise, there was a well-defined radiopaque shadow in the right upper lung field in continuation to the right border of the heart (Fig. 1). The patient was hemodynamically stable, though she had slight discomfort in the right side of the neck but no visible swelling in the right cervical region. She had no difficulty in breathing or deglutition or any change of voice. Repeat chest radiograph after 24 hours did not show any progression in the size of the lesion.

Subsequently, the patient underwent HRCT chest, the report of which showed an ill-defined, heterogeneous, hyperdense lesion in posterior mediastinum extending from thoracic inlet cranially and extending along the esophagus up to the retrocardiac region measuring (7 × 5 × 8 cm) in size. The lesion was seen in prevertebral and right paravertebral regions of the upper dorsal vertebra and caused mass effect over trachea and carina and also displaced the esophagus to left, suggestive of a posterior mediastinal hematoma. Also, there was bilateral moderate pleural effusion, more on the right side (Fig. 2). 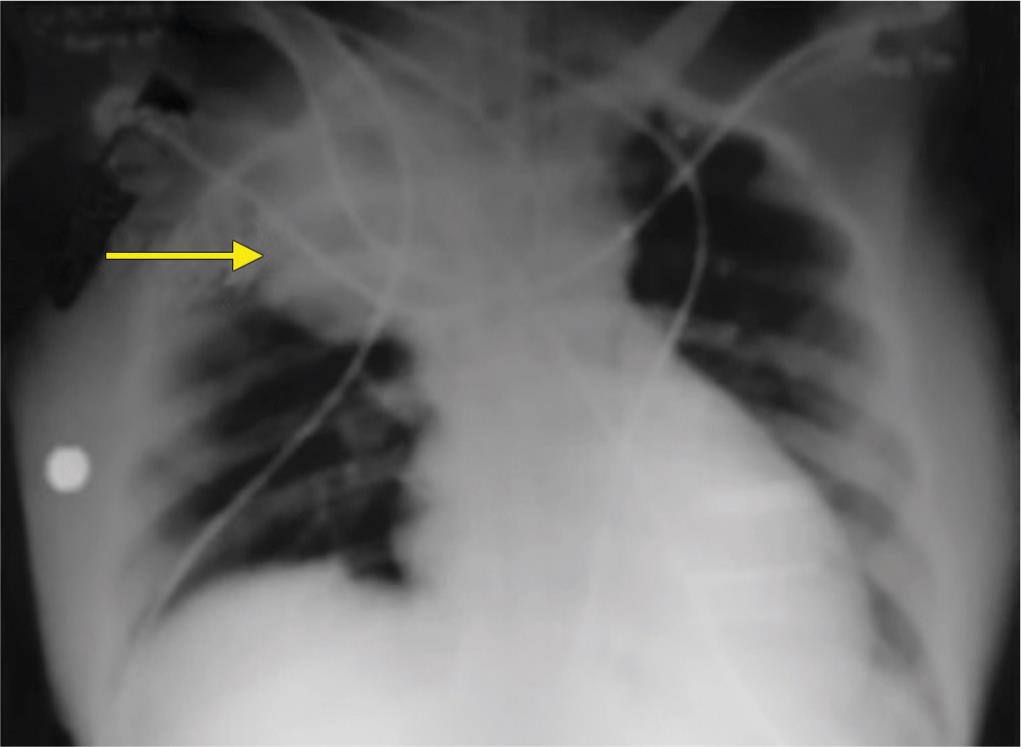 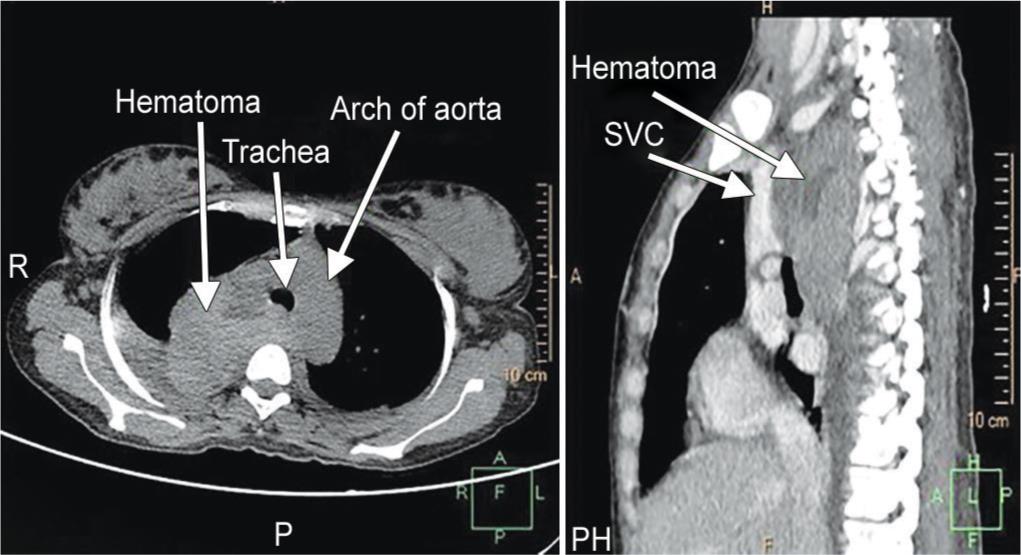 Fig. 2: Day 1 HRCT report showing the extent of the hematoma and its dimensions 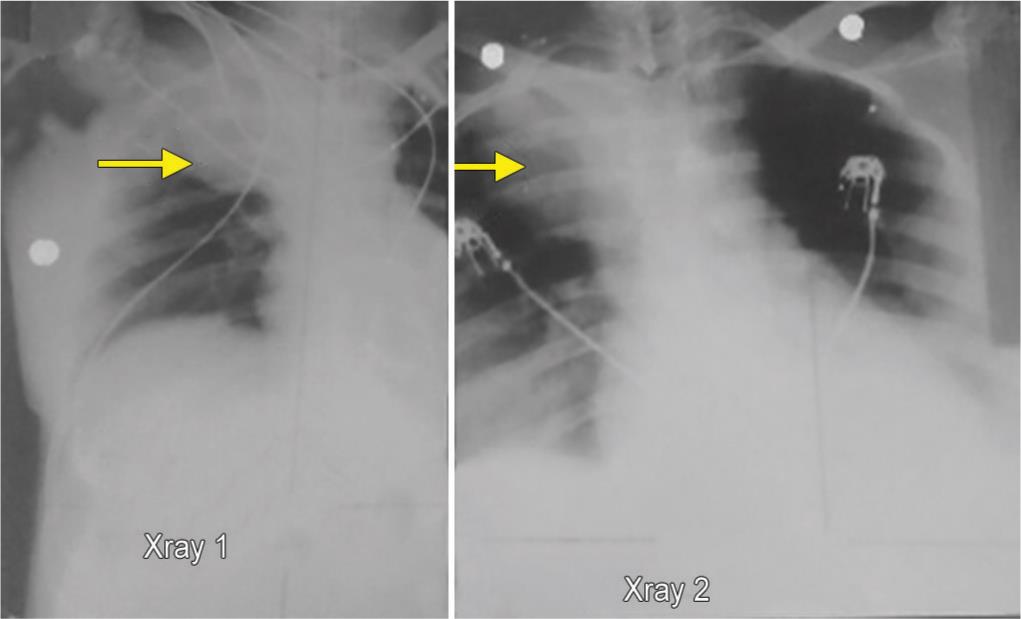 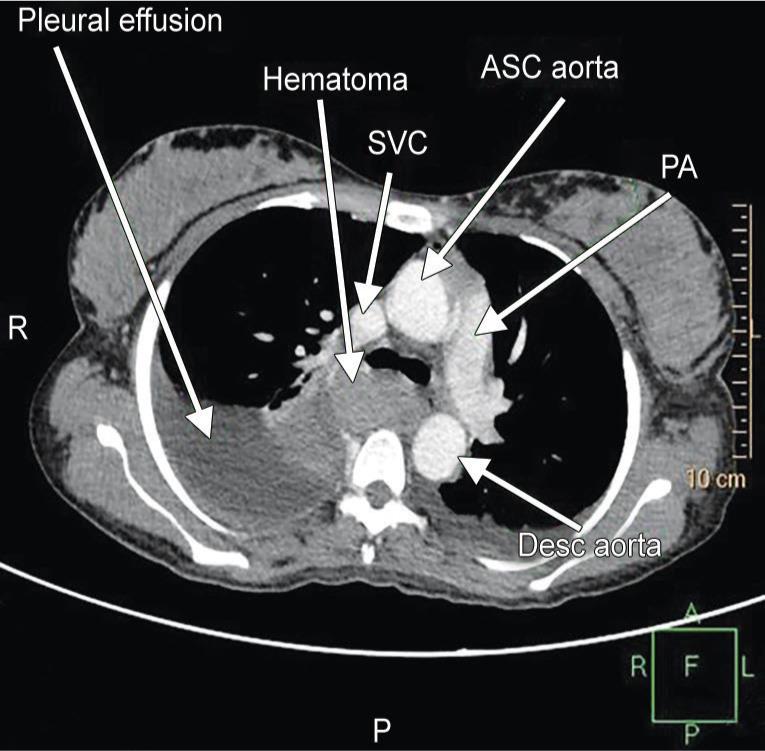 Cardiovascular thoracic surgeons were consulted for the same. They suggested no active intervention provided the patient was hemodynamically stable but asked to repeat computed tomography (CT) of the chest after 48 hours. Thoracotomy would be indicated if there was any further increase in the size of the lesion.

We repeated her chest X-ray after 4 days and noticed that there was no further increase in the size of the lesion but had become less dense (Fig. 3).

As the patient was asymptomatic and hemodynamically stable, we kept a close vigil and managed the patient conservatively with repeated clinical examinations.

Her stay at the hospital was uneventful and she was discharged on 20th postoperative day. The patient underwent weekly chest radiographs as a part of her follow-up. Hematoma completely resolved in 6 weeks.

The cause of these vascular complications can be ascribed to the unsafe manipulation of the dilators, sometimes even causing ventricular perforations. Other probable mechanisms of injury include kinking of the guidewire, resulting in the misdirection of the dilator and perhaps insertion of the guidewire outside the vessel.6 All these complications may be due to several reasons like inexperience, the number of attempts at needle insertion, the use of relatively larger gauge needle, severe dehydration, morbid obesity and coagulopathy.

Hematoma formation has been reported in up to 4.7% of all catheter placements.6 Hematoma formation itself is not life-threatening, but the pleural space and mediastinum are both potential spaces where hematoma may occur. However, such blood accumulations in the form of hemothorax and hemomediastinum can be significant sources of infection in critically ill patients and may progress to abscess formation. These may require surgical intervention with the help of image-guided (i.e., CT) drainage.7

The innominate-superior vena cava (SVC) junction is in close proximity to the pleural and pericardial spaces. Localized central line perforation within the mediastinal pleura may not cause significant complications if identified early and the catheter removed promptly. However, if the perforation is delayed or missed, hydrothorax communicates to the pleural space. The hydrothorax is usually on the contralateral side of the chest from the central line placement. In some cases, it may be bilateral.8

Thus, our case was reported for its relative rarity since till date only 12 cases of mediastinal hematoma due to IJV cannulation have been reported in the literature.9–19

Of all these cases, left-sided IJV cannulation was attempted in three patients (23.07%) and right-sided IJV cannulation was attempted in 10 patients (76.92%). In two patients, IJV was cannulated using ultrasonography (15.38%) and in the remaining 11 patients (84.61%) it was cannulated blindly using anatomic landmark technique. Patients had associated conditions which could have resulted in hematoma formation namely two patients with postcardiac surgery status associated with post heparinization causing coagulopathy, four patients were end stage renal disease (ESRD) patients for hemodialysis with coagulopathy and qualitative platelet abnormality, one patient with gastric cancer for chemo port insertion with radiation-induced bone marrow depression, one with intestinal obstruction, one patient was postburn patient with deranged coagulation, one with severe preeclampsia with qualitative platelet dysfunction whereas three patients were not associated with any conditions.

We believe that hematoma in our case was caused by injury to the carotid artery or IJV secondary to forceful insertion of guidewire against resistance and subsequent leakage of blood leading to mediastinal hematoma.

Another explanation could be due to some kind of inert bleeding tendency since she also had developed rectus sheath hematoma and hemoperitoneum postcesarean section.

Severe pregnancy-induced hypertension may cause coagulation derangements, but in our patient coagulation profile was normal. These coagulation abnormalities could have been confirmed using thromboelastography.20

The complication was detected on the postprocedure chest radiograph.22 As the patient was asymptomatic and hemodynamically stable, we decided not to intervene and had kept close vigil; the patient improved with this conservative approach.

In conclusion, meticulous surgical technique, knowledge of the complications and close monitoring of the patient in the postprocedural period are of utmost importance to prevent complications after central venous catheterization. Incidents of accidental arterial puncture can be minimized using the ultrasound technique for venous cannulations. Avoiding forceful insertion of the guidewire and removing the entire assembly in case of resistance to guidewire insertion proves useful. Routine postprocedural chest radiographs should be done. Thus, the mediastinal hematoma can be managed conservatively in asymptomatic patients.